Five Leadership Lessons From A Week With Richard Branson 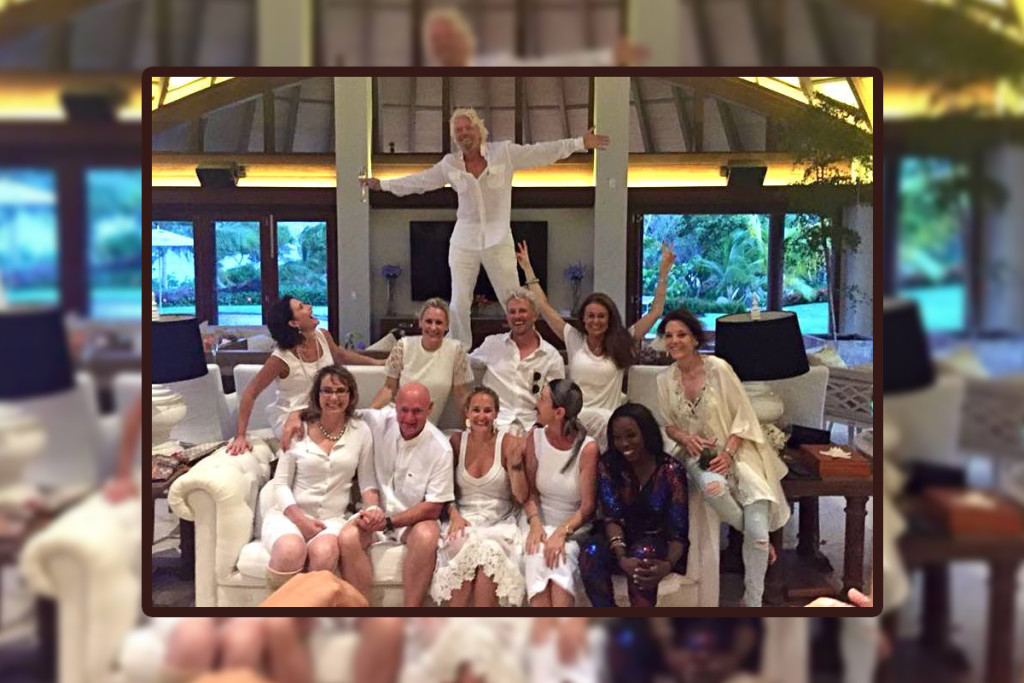 Sir Richard Branson is a man I’ve admired as long as I remember. His books – jammed with stories of his entrepreneurial exploits and intrepid adventures on earth, sky and space – sit atop my bookshelves, their pages underlined with insights on taking risks, managing setbacks and living bravely.

So when the opportunity arose via Business Chicks and Virgin Unite to spend a week with him on his private Caribbean island of Necker, I was curious as to what else I could glean from the man behind the larger-than-life media persona. As it turned out, plenty. It just wasn’t what I’d expected. In fact what impacted me most was not his brilliance as a businessman (clearly that’s a given!); it was his “way of being” and how that infused energy, passion and creativity into our group, the conversations we had and the possibilities that emerged from them.

Before I arrived in Necker Island, Emma Isaacs, the CEO of Business Chicks generously asked me if I’d be open to facilitating a Q&A session with him. I was delighted and honored by the opportunity but, admittedly, a little nervous too. A few times I had to sit myself down and remind myself of the advice I give to others; that no matter wealthy, clever or accomplished someone is, they was ultimately no more human than anyone else.

Turns out I give good advice, because, for all of Richard Branson’s fame, fortune and larger than life media persona, he’s actually a very relatable and approachable person.

From our first interaction as I was making my morning cup of tea, he was warm, friendly and easy to be with.

The lesson: Be someone others find it easy to be around

Many people are quite out of touch with how others perceive them and some even get a kick from being intimidating (a sure sign of an insecure ego.) But it’s worth taking a moment to put yourself in the shoes of the people you interact with to consider how they may see you. Often, as people grow more successful professionally, others grow more reticent to approach them, share information and speak candidly. As a result, successful people can become increasingly isolated and out of touch in their ivory tower. Regardless of whether you’re at the ivory tower level or not, making people feel comfortable around you is vital to staying tuned in to what is on people’s minds and forging genuinely rewarding relationships. Richard Branson does just that. (Oh and by the way, our interview went great!)

Sir Richard Branson may have had a Knighthood bestowed upon him by her Majesty the Queen, but he was clearly not one for titles, nor the pomp and formality that can accompanies such titles.

Often barefoot on his island paradise, Branson is completely and refreshingly unaffected by his status and has no need to prove himself to anyone – a hallmark of every genuinely inspiring human being I’ve ever encountered. Of course that doesn’t mean he doesn’t have a healthy sense of self-worth, but he isn’t driven by a need to prop it up. Needless to say, it was refreshing to meet someone of his fame and fortune who cares so little about it except to use it for good.

The lesson: Give up pretense and ditch the ego

Not only do you not have anything to prove to anyone, but when you try to do so, it doesn’t enhance how others perceive you; instead, it diminishes their perception.

Watch the business news and you can’t miss a bunch of suited men (and the occasional woman!) talking very seriously about very serious things because, let’s face it, managing a business-economy-country is serious business. But too much seriousness can suck the joy out of life.

While Richard Branson was not the loud larger-than-life larrikin I had somehow expected, he brought a light-hearted, lets-not-take-ourselves-too-seriously playfulness into our gathering, as he does everywhere. When we gathered at his home one evening to listen to Estelle perform for our group, he was the first to jump up on the bar and start dancing. I quickly threw off my heels and followed suit. Dancing on that bar, I decided I must do it more often. I mean, who needs a dance floor?

The lesson: Laugh more, stress less and stop taking everything so seriously (yourself included)

It’s not only good for your health, but it makes you much more fun to be around. So if you think you’ll one day look back and laugh, don’t wait. In the seriousness of life, a little play can make all the difference.

Each morning on Necker revolved around a “think tank” session where we heard insights from a host of people on business, leadership and life. One of them was former NASA Astronaut Captain Mark Kelly who talked about good decision-making. He said, “None of us are as dumb as all of us.”

It was a great insight on the perils of “group-think” and the importance of challenging the consensus thinking. As Kelly spoke, Branson scribbled notes in his small note pad that he takes wherever he goes.

Sure, he may have built over 100 companies operating in 50 countries around the world, but he was open to new ideas and eager to find better ways of doing things. While being open minded may sound like sheer common sense, I’ve observed that as people grow older, they can easily slip into a fixed view of the world. They become complacent in their approach and closed to new (and better) ways of meeting their challenges.

The lesson: Be open to unlearning what you think you know so you can re-learn what you need to know

Keep asking questions and never assume you have all the answers. Because, no matter how successful you may be, there will always, always, be ways of doing things better.

At an age when many would retire to the golf course (or in Branson’s case, to a tropical island), Branson has no interest in putting his feet up and sipping martinis. There are still so many things he’s passionate about, including the various initiatives of his foundation Virgin Unite.

Of course it’s easy to be cynical and say “All fine for Richard Branson to do what he likes; he’s loaded!” But the truth is that he got to where he is because of the passion he’s bought to everything he’s done and his willingness to lay it all on the line to turn his audaciously bold dreams into reality.

Passion is contagious. It rubs off on everyone around you and attracts enthusiastic passionate people to you like moths to the flame. From meeting Branson’s team at Virgin Unite, he’s clearly done just that.

The lesson: Find what you’re passionate about and then find a way to do more of it

If you’re passionate about what you’re doing, then you’ll not only do it better but you’ll be more successful at it. Branson is a great example of someone who has done just that. Again and again and again.