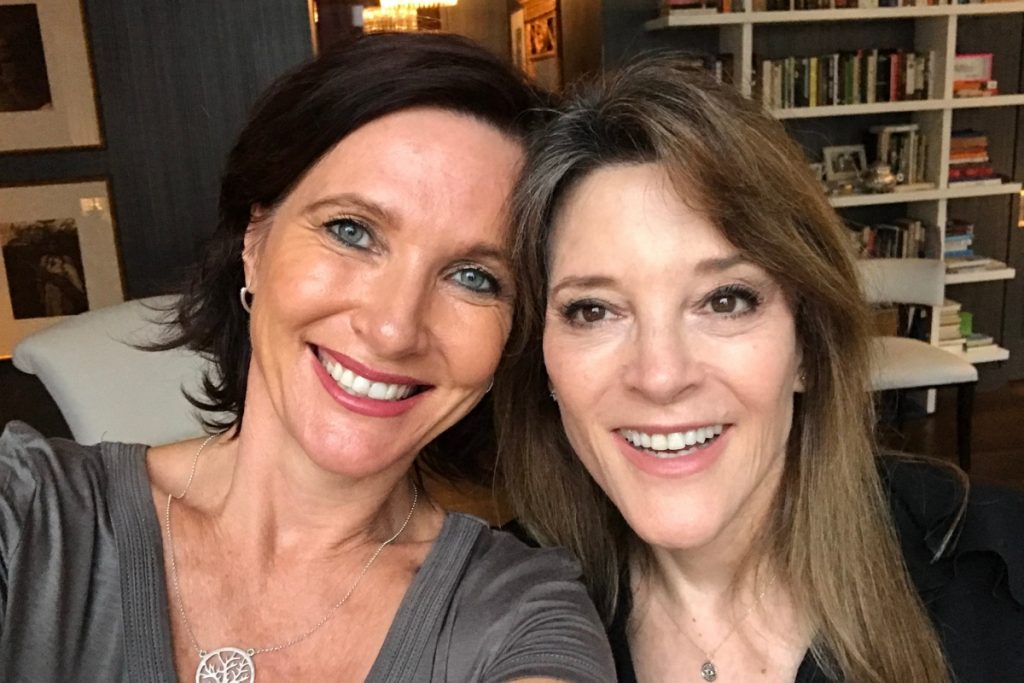 I was not long out of university when I first came upon these words by Marianne Williamson. Soon after, they inspired the decision I made with my newly-minted husband Andrew to take up jobs in Papua New Guinea. Marianne’s words have also guided countless decisions since – from more global adventures to writing my first book and having a fourth child (in five years) despite my fear of being inadequate for the task. On every count.

So it was such a thrill to meet her three years ago (on Necker Island with Richard Branson) and an equal delight to sit down with her in her Manhattan apartment a couple weeks ago to interview her for my Live Brave Podcast. 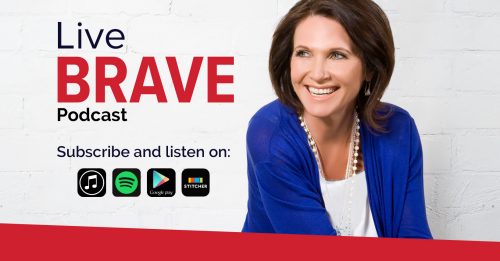 Marianne is many things. Fiery. Articulate. Direct. Unapologetic and political. When I pondered out loud if I’ve been cowardly or prudently cautious for steering out of political debates she said, “We cannot separate out our spiritual lives from the political reality in which we are living.”

Of course in the short term, it is always easier to avoid political conversations and stick to ‘safer topics’. But, as Marianne argues, the source of power is not in the government, it is in us. She advocates for a renewed spiritual and social consciousness that transcends religion or partisan politics and promotes a more holistic approach; one that converges spiritual wisdom with individual political responsibility.

Marianne Williamson, who made an unsuccessful bid for the US Congress back in 2014, is on a mission to wake people up to the gravity of the problems facing America and the planet. During our conversation she made an impassioned call for action to address the problems that are creating so much suffering – with more love, less fear; with deeper compassion, less complacency; with greater personal responsibility, less complaining, bickering and blaming.

“I feel that in the deepest part of us we want to play the big game,” she said. “But you can’t play the big game in life unless you are taking the big responsibility of life.” While we cannot always choose the circumstances of our lives, we always have the power to choose how we will respond to them. If we aren’t actively choosing to be part of the solution in addressing the problems we see around us then we become, by default, complicit in perpetuating them. What we don’t do in life has no less an impact than on what we do.

Of course, given the scale of negativity consuming our airwaves, it’s easy to buy into the belief that each of us, on our own, is powerless to make a meaningful difference.  Yet believing that we are powerless is an unconscious way of avoiding the responsibility for using our power. “In advanced democracies, nobody has the right to say ‘I can’t make a difference’,”, Marianne said. “If you are on Facebook or Instagram or Twitter, you have an influence.”

Clearly little is served by doing more of what already is not working – vilifying, deriding and dehumanizing those who hold different opinions, justifying immorality or excusing incivility, much less adding to it.

If you’re unsure where or how to begin, make time to sit down with someone who holds different political viewpoint to you. Then, without any intention of trying to change their mind, ask them to help you understand why they see things as they do. Step into their shoes and speak only to clarify your understanding, not to argue why they’ve got it all wrong.

By taking the time to genuinely see through the eyes of another, it helps people feel heard, defuse defensiveness, and, over time, can make them more willing to try to understand you. No one responds well to being told they are wrong or stupid. We all respond better when we sense that others are genuinely trying to understand how we might even be right. And everyone is better off when we can find a mutual middle ground upon which to step forward, together.

We will only address the big problems in the world when we decide to look within ourselves to see where we are failing to act with the courage, compassion and character that we want to see in those who are charged with leading us. Change will not happen from the top. It never does. It happens from the bottom – across the dinner table, at the cafe, on the bleachers, in the park – and every one of us, regardless of our positional power or social strata, holds the power to step up to the plate in our own lives and communities and to be a source of empathy, inspiration, understanding, and encouragement for those around us.

If there is one thing the recent outpouring of tributes to John McCain revealed, beyond the kind of man he was, it’s that the world is hungry for people who have the power to step up and use it well. If you have the ability to listen, to speak, to cast a vote, to share a post, or to write a note, then you are one of them. After all, how else can those who have no vote and received no education, ever enjoy the opportunity, equality and basic human rights that we all too often take for granted?

You ask yourself, “Who am I to be a change maker, a leader, a force for good and champion for change?”

Who are you not to be? Your playing small does not serve the world.

Listen to the Live Brave Podcast