Richard Branson: My Time With The Man Behind The Brand

“Every risk is worth taking as long as it’s for a good cause and contributes to a good life.” – Sir Richard Branson
Maverick. Risk taker. Rebel. Trailblazing tycoon. Billionaire buccaneer. Adventurer. Disruptor.

Sir Richard Branson has been called all these and many more. So when I got an invitation to spend five days with him on his private Caribbean island it was an easy Yes! When I was later asked if I’d interview him for a special Q&A session, I was even more excited (though a little bit nervous too!)

The Branson brand, just like that of Virgin, stands apart. Yet on meeting the man behind the larger than life media persona, I was struck by his humanity and humility. Expecting plenty of ego, I was disarmed by his lack of it. Instead I encountered a man deeply passionate about tackling the big challenges of our time – from climate change to social inequality, all while having a lot of fun on the way. The people on his team at Virgin Unite (who had organized the gathering in conjunction with Business Chicks) were no less so.

My experience on Necker Island transcended anything connected simply to business or brand building or even the hedonistic pleasures Necker is famed for. Each of the speakers at our morning ‘think tank’ sessions – who ranged from retired NASA astronaut Captain Mark Kelly to spiritual author Marianne Williamson to WordPress founder Matt Mullenweg – spoke from the heart, without pretension, and with a genuine desire to help.

While I gained a wealth of insights into leadership, entrepreneurship and social enterprise (which I’ll include in future blogs and Forbes columns), what was even more valuable was the experience itself – being surrounded by passionate people intent on making a meaningful contribution in the world. If you’d like to see my photo album from my time on Necker, click here.

Sparks of possibility flew fast and furiously as the forty two of us gathered on Necker – entrepreneurs, business leaders and thought leaders – and talked about what lights us up and explored how we can better use our unique talents, expertise, and resources to positively impact the world – to solve bigger problems, ease human suffering and disrupt the status quo – and, to use a Branson catchphrase, “to do well by doing good.”

Of course I’m very mindful that few people will ever have the opportunity to visit Necker Island. One billion people still live on less than $2 a day, and the bulk of the world’s wealth is held by a small elite group of people, many far wealthier than Richard Branson.

Yet that is precisely the point!

If you are literate enough to be reading this, your ability to affect change is far less dependent on your wealth, status or size of your Twitter following than it is on your belief about your ability to affect change – starting in your home, family, workplace, community and extending outward.  And while we may look to politicians and Branson-like power brokers to lead the way, we cannot – and we must not – rely on them to solve our problems for us. Most of all, we must never underestimate the ripple effect we set in motion when we take responsibility for being the change we wish to see in the world.

Some call Branson lucky. But while he’s had more hits than misses since dropping out of high school to start a magazine, not every endeavor has taken off (remember Virgin Cola?). During my time speaking with and interviewing Branson I found a man who is every bit human. What has set him on a different trajectory from so many others has been the audacity of his dreams, his willingness to both take bold risks to achieve them, and to seize opportunities that others either didn’t spot or were too complacent or timid to pursue.  It’s worth remembering that Branson mortgaged his home multiple times in his early days at Virgin Records and nearly died in his attempt to circumnavigate the globe non-stop by hot air balloon.

At his core, Branson is an entrepreneur who thrives on challenging what’s possible and improving the status quo – doing things smarter and better while stirring up the established power structures in the process.  Now in his mid sixties and in a stage of life where many retire to the golf course, he’s focusing his seemingly boundless energy into finding better ways of doing business, improving inequality, and developing renewable energy sources to sustain humanity far into the future.

Sure, Branson knows how to have fun, and he infuses it into everything he’s involved with. (Did I mention that I danced on a bar with him while singing back up vocals for Estelle?) But for all the fun, fame and wealth, the measure of his legacy will transcend the 100+ businesses he’s built or the records he’s broken.  It will be measured by the lives he has lifted. And at risk of sounding cliché, after my time on Necker Island, he can add one more that list.

Of course we’re not all wired with the appetite for risk and adventure as Richard Branson. But everyone of us has the opportunity to step up to the plate in our own lives, to disrupt that which needs disrupting and to make the unique contribution that we alone can make. As I say in this short video I filmed on my iPhone (the legacy of another maverick disruptor), our greatest fulfilment doesn’t come from money or status, it comes from making a stand for something that compels us out of comfort and complacency to create a future that not only helps us to live better, but helps to better the world.

While I wished I was past self-doubt, the truth is that I spent my first few days on Necker Island feeling a little like an imposter. Who was I to be there among so many extraordinary people? I haven’t built a business empire, flown to outer space or conquered an adversity near the size of Gabby Giffords’.

But then it hit me. That was my fear at work. The real question was: Who was I not to be there? And if not me, then who? And if not now, then when? As Marianne Williamson said to me in a gentle admonishment, there is nothing holy in diminishing oneself. Sure, our fear may spare us from failing and losing face, but it will also keep us from speaking truth, living large and doing good.  To overcome it, we have to stare it in the face and step forward in its presence. Every. Single. Day.
The first question I asked Richard during our interview was “What’s the most courageous thing you’ve ever done?”  He wasn’t sure where to start!  I just hope that one day when you look back on your own life, you will be proud of the many times you chose move toward what inspired you, however much it also scared you. Who knows, maybe the most courageous thing you will ever do is still to come!

For more photos of my week on Necker Island, visit my Facebook page. 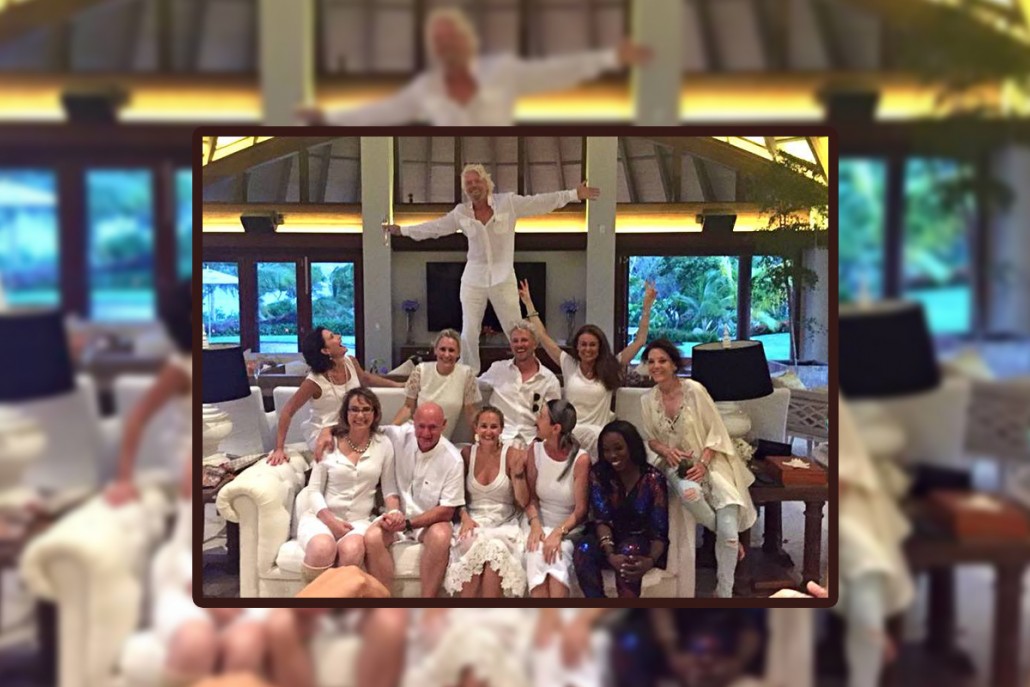