What’s Your Everest? Diana Nyad’s Message: NEVER GIVE UP 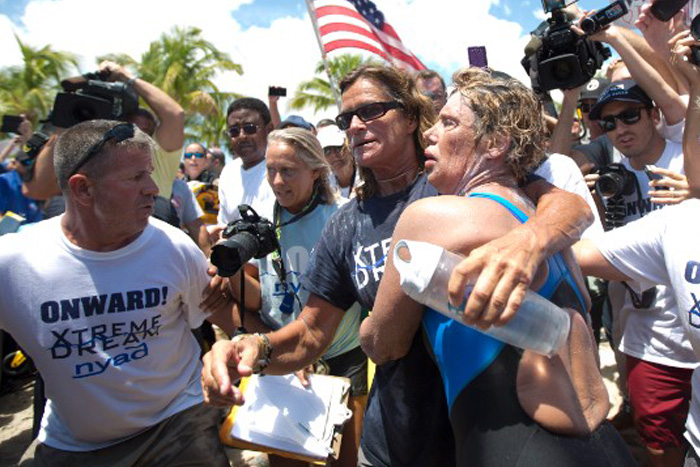 This last weekend sixty-four year old Diana Nyad fulfilled a life long dream to swim the 180 kilometres from Cuba to Key West.  Having tried and failed four times before, it was no small feat.

As she crawled out of the water, her lips swollen, her face puffed up and her skin resembling sandpaper, she warded off the paramedics waiting with their IV trip and stretcher long enough to share what the beliefs that inspired her fifth and final attempt:

“I got three messages. One is, we should never give up. Two is, you’re never too old to chase your dreams. Three is, it looks like a solitary sport, but it’s a team.”

There’s much wisdom in each of those messages for every one of us, regardless of how successful or unsuccessful we’ve been in pursuing our own dreams, how old we may feel we are, or how self-reliant we like to be.

Of course when we hear stories like that of Diana’s we often think she is made of something different to us – more metal, less doubt, more determination, less cautiousness.

But it isn’t true.

Life is as big and rewarding as we dare to make it.  Sure, it’s safer to stick with what you know you can achieve, to set your sights on the doable and steer away from the daring.

The reality is that every single person on planet earth is capable of achieving something worthwhile; that makes a difference in some way.  I’m not referring to feats of endurance that may land us in the Guinness Book of Records of make front the front page of the papers. I’m talking about things that move our lives beyond the realm of the ordinary, that require us to dig deeper and to achieve more, far more, than we otherwise would.

Diana Nyad’s No.1 rule for her crew during her marathon swims is not to let her know how far she has to go. I’m guessing it’s because when the going gets really tough, as it would during a 52 hour, 54 minute swim across a mass of water famous for it’s boxer jelly fish and sharks, ferocious currents and eddies, it’s easier to simply stay focused on the staying on course, rather than on how far it is til the end of it.

I don’t know what dreams have long inspired you, or what goals you have thought were too big, too hard, or too risky to pursue. But I do know this:

As I wrote in Stop Playing Safe, “Life is as big and rewarding as we dare to make it.”  Sure, it’s safer to stick with what you know you can achieve, to set your sights on the doable and steer away from the daring. But whether or not you ever get to the summit of your Everest, as Diana did this last weekend, matters so much less than your willingness to give it a go.  As Michaelangelo once said, ‘The greater danger is not that your dreams are too lofty and you fail to achieve them. It’s that they are too small and you do.”