“Faster, Higher, Stronger!” The Olympics challenge us all to raise the bar. 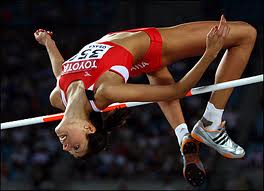 (Reprinted from the article I wrote for Forbes.com)

Today I read that a blind archer has set a new world record.

I love the Olympic games. I love their motto:

We can all draw a lesson from the Olympics. One is that we should never buy in to what other people say is possible for us, or more to the point, not possible. How do they know? How does anyone?!  If the Olympics move and inspire millions of people around the globe – across cultures, religion, race and riches – it’s not because of how fast people run, how high they jump or how strong they lift. It’s because they have pushed the boundaries of what is possible for themselves and worked their tails off to overcome many hurdles (to use an Olympic race) along the way.

Will Jamaica’s Hussein Bolt keep his place as the fastest man alive?

Will Anna Mears, Australia’s Cycling Queen who has overcome more obstacles than many, including a broken neck, win another gold and create another world record?

Will America’s Michael Phelps, one of the most dominant swimmers in history, come home laden in medals yet again?

But as you watch your favorite athletes give their heart and soul to a pursuit they have sacrificed most of their lives to excel in, I encourage you to think about where you have bought into beliefs that have kept you from excelling in yours?

While each of the athletes, competing at this Olympics are there to win (as they well should), they must also know that only a few of them will.

Likewise for us, not all of us can achieve the great heights of glory and professional success that we look to with envy in others. We won’t all be CEO’s or have our business listed on the Fortune 500.  We won’t all be hailed as heroes, geniuses or trail-blazers and accorded the status that goes with it.  But what gets in the way of most people ever having a chance of achieving the success they are capable of, is not a lack of luck or talent, but simply a lack of courage and determination to pursue it.

As you sit back in your living room and watch the opening ceremony, take a moment to think about what it is that you are willing to work toward that will inspire you to dig deeper, work harder, and excel. Not for a Gold Medal, for glory or wealth. But simply because it is a goal worth pursuing; a goal that honours the best of what you have to bring to the world, regardless of how fast you can run, how high you can jump, or  how strong you can lift.

What will your creed be in life?

It’s not the triumph that ultimately defines who we are, but our willingness to work hard toward a goal that is bigger than we are, knowing that as we do, we will discover just how capable we truly are and attain our own Personal Best.  After all, isn’t that ultimately what the true Olympic spirit is about?

If a legally blind archer can set a new world record, then what excuse do any of us have for not achieving more?