9/11 Remembered… a Profound Lesson in Courage 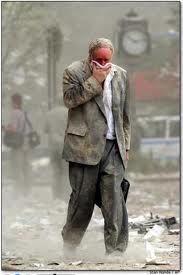 Ten years ago today we witnessed extraordinary bravery and heroism by people who would have told you they were neither brave nor heroic. What better way to honor their lives than to live our own with greater courage.

I remember watching a young woman, ashen faced, on my television in the hours after the twin towers collapsed.  She was in Manhattan and was searching desperately for her fiance. He worked on the eighty-something floor of the World Trade Center. They were getting married later that month. She had been walking non-stop for six or seven hours, from hospital to hospital trying to find him. She held a placard up to the camera with a picture of him with his name underneath and her cell phone. She pleaded for anyone who had seen him to contact her.  She wasn’t crying. She looked too shocked to cry.  She just said she was keeping faith that he would be found alive and that she would not stop her search until she found him.

Today as millions commemorate the tenth anniversary of the devastating attacks on America, there is much to reflect on.  Just as none of us could ever imagined the events of that day, none of us could know how history would unfold in the decade to follow.

Amidst all the lessons and remembrances,  I believe one of the most important things we should all do today is to reflect on the extra-ordinary courage we witnessed that day and in the days and months, and indeed years,  that followed. On 9/11 we witnessed bravery and heroism by people who would have told you they were neither brave nor heroic. And in the years that have followed, as thousands have headed to foreign lands to fight a “war against terror” or stayed at home to rebuild lives torn apart by terrorists,  we have witnessed more of the same.

On 9/11 we witnessed bravery and heroism by people who would have told you they were neither brave nor heroic.

Whether you were directly affected by 9/11, or, like me, were not, there are powerful and inspiring lessons to draw from it. And to me none more powerful, that acknowledging that we too often underestimate our potential for bravery, for courage, and for heroism.  We assume that because we have never entered a burning building, nor put our lives on the line for others, nor had to cope with the tragic loss of someone we love to an act of hate, that we don’t have the courage we witness in others. But that is simply not true. Every one of has the potential to act with amazing courage, it’s just that we have not all been found ourselves in circumstances where we felt compelled to do so.

I never found out what happened to that young woman; whether she found her fiance or not. But I recall as I sat glued to my TV screen, that my heart was filled with foreboding for her.  And while I hope that hers was a story that ended with relief and joy and gratitude,  something still tells me that it didn’t, and that she joined the many thousands of others whose hearts were wrenched apart that day.

Our lives have all moved on in the last ten years. Events beyond our control have shaped us in ways we would never have known or predicted. Today you will likely find yourself watching replays of the images from today ten years ago. As you reflect on how you felt that day, and on the courage you saw in the brave men and women, New York fireman front and center, who risked and gave their lives to save others that day, I invite you to reconnect to with your own courage and to commit to risking greater vulnerability so that you can live your life more fully and honor the thousands who lost their lives that day, ten years ago today.