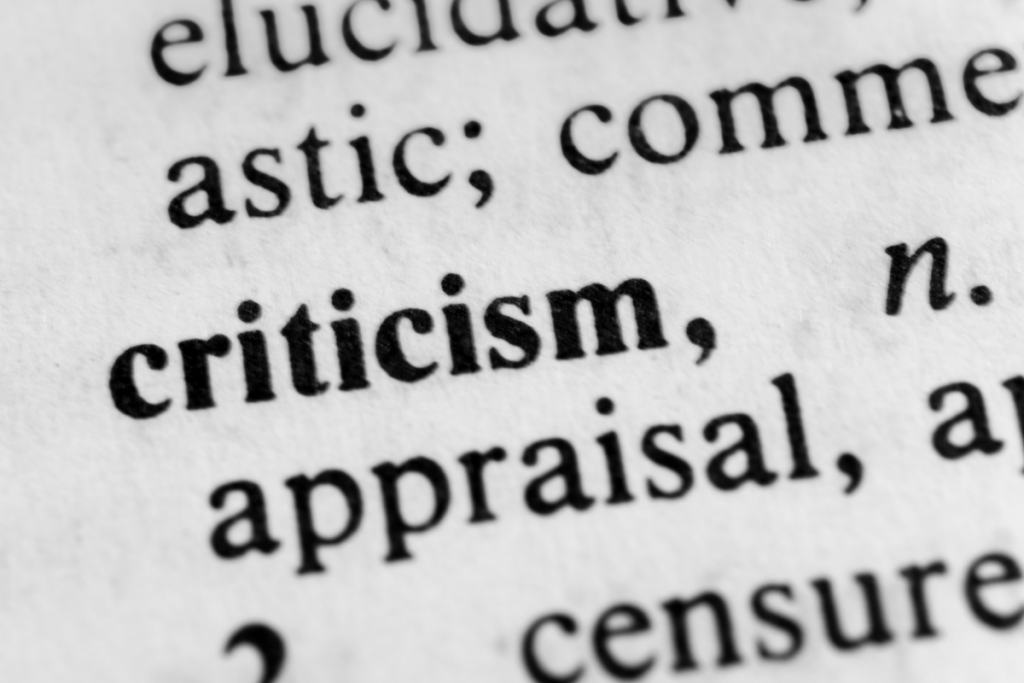 “It is important to learn how to take criticism seriously but not personally.” ― Hillary Clinton

It’s great advice. Yet if you’ve ever been criticized (and let’s face it, who hasn’t?), you’ll know that being told “not to take it personally” often does little to soften the blow. That’s because criticism hits at the heart of our basic desire to be liked, accepted and admired. Being told we have work to do can feel like a punch in the gut.

As much as we might dislike being criticized, learning how to extract any value it holds without curling up in a ball or discounting it outright is a skill worth learning. These six questions will help you do just that.

1. Could this criticism hold anything valuable for me?

First up, decide if it’s worth taking on. Let’s face it, the world is full of critics. What you need to decide is how much authority you want to give to the person who has criticized you to begin with. If they’re doing it anonymously (like on social media), then I would recommend “not much”! Yet if they are someone you know, someone who generally would not be critical without a good reason, then maybe their feedback is worth trying to understand. Obviously, if it’s your boss or someone you need to get along with to move forward, then whether or not you hold them very highly, you need to listen to what they’re saying.

2. What concerns is the person giving it speaking from?

All criticism is not created equal. Some of it is invaluable and comes from a genuine concern to help you in some way, and some of it should be taken with a grain of salt. It’s simply not worth your time to give it a second thought, say if it’s from someone you know who finds something to criticize about everyone.

Numerous times over the years, I’ve been the recipient of criticism that is clearly not about me but all about the person delivering it: their fears, their concerns, something going on in their life that has nothing to do with anything I did or said. I’ve learned to tune out those people.

3. Where am I over personalizing it?

Often, criticism is so laden with emotion that it’s hard to be objective about it. If you’ve found yourself feeling sensitive, write down the key bits of criticism in a very factual and dispassionate way. Precisely what did you do or fail to do? The more you pull out the dramatic language and distance yourself from the emotions, the better placed you’ll be to respond objectively.

Who you are is not the results you produce, good or not so good. So if criticism is warranted, distinguish your self-worth from the object of the criticism. No one is good at everything and even people who excel sometimes make mistakes or fall short of expectations. So no matter how hard you’ve tried to get things right, if someone points out where you fell short, don’t beat up on yourself. That serves no one and nothing. Far more fruitful is to forgive your own fallibility and recommit to doing better.

4. What’s the one core gem in what has been said that I can use to better myself?

Within most criticism, there can be some insight that you can take to grow, learn, change and improve in some way. So even if you’ve been criticized harshly or feel it’s unfair, don’t throw the baby out with the bathwater. There are always going to be haters, but sometimes they have reasons worth hearing out. Look for the gem hiding in the rubble and be intentional in using it well. The other bits? Leave them in the rubble. Some people find it so hard to give criticism that when they finally do, they spew out all sorts of rubbish that may be completely unreasonable or irrelevant to where you are right now. Filter out what’s actionable. Leave the rest.

5. What new actions can I take to further my success?

As I write in Make Your Mark: A Guidebook for the Brave Hearted, no matter how hard people might judge you, you are always at choice about how you respond to it. Sure, it can be discouraging when your boss sends your work back to you with red ink all over it, but these are your best opportunities to get better. And sure, getting nothing but praise may feel preferable, but it doesn’t give you nearly as much opportunity to hone your game and expand your skill set.

6. Do I need to thank them for caring enough to share it?

Not everyone deserves to be thanked for giving critical feedback. However, if you know the person providing it to you has done so with the best of intentions, then thank them for caring enough to share it with you. Maybe they didn’t deliver it particularly well. Maybe they were a little too harsh. Just recognize that for many people, giving critical feedback is actually incredibly difficult and can take a lot of courage as they risk the possibility of you not responding well. So as tough as it might be for you to hear it, by acknowledging that they laid their own comfort on the line for your benefit, you can help to pave the way for far more fruitful conversations in the future.

Get a regular dose of inspiration and practical advice from Margie delivered straight to your inbox.
{"enable-exit-intent-popup":"true","cookie-duration":4,"priority":0,"fade-in":"0","popup-selector":"#popup-box-pro-gfcr-1","popup-class":"popupally-pro-opened-pro-gfcr-1","cookie-name":"popupally-cookie-1","close-trigger":".popup-click-close-trigger-1","close-iframe-selector":""}