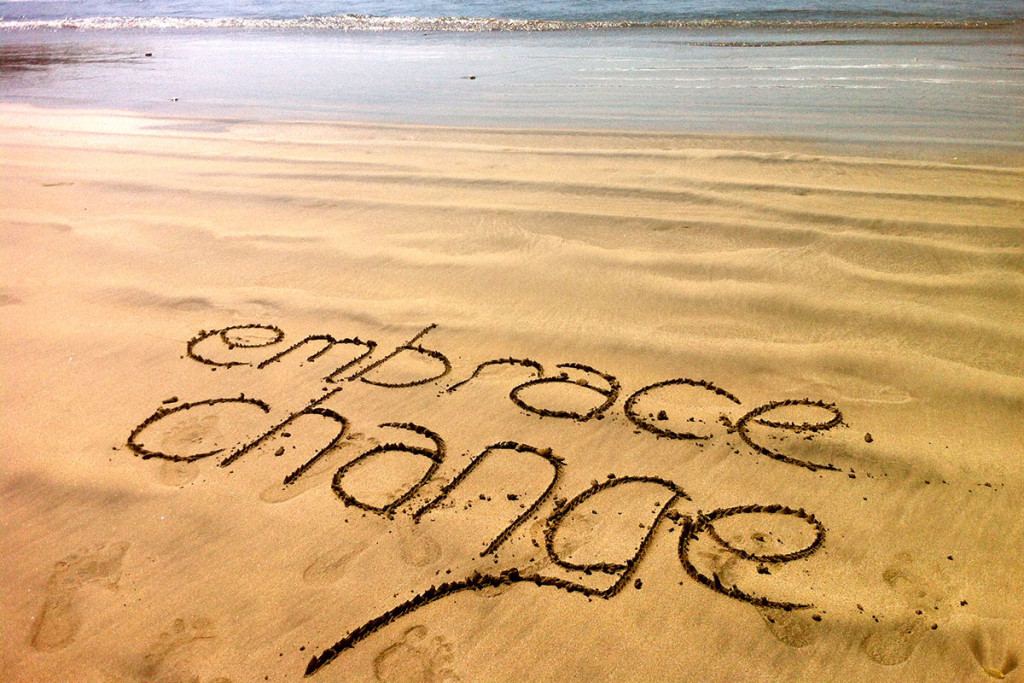 Change is never easy, even change for the better. It’s why so many people choose to stay in jobs they loathe, in relationships that chip away at their self-confidence or sticking to habits that rob years from their life, rather than embrace the uneasiness, uncertainty and vulnerability that change creates.

Change can take a toll. I know this all too well having had to deal with plenty of change over the years. Think having four kids, in three countries, across six homes in five years. Change overload. If you are facing a big change in your life or working overtime to preserve the status quo, you’ll relate.

Of course sometimes change can be exciting. Starting a new job. Changing career. Getting hitched. Starting a family. Moving across the country…. or world.

But even when it’s a change that we’ve chosen, it still brings with it a level of anxiety for no other reason that we’re stepping onto new and unfamiliar ground. Something we human beings are wired to avoid.

Even when it’s a change that we’ve chosen, it still brings with it a level of anxiety.

It’s part of our psychological DNA to seek out and preserve the familiar. It reassures us of who we are, and where we fit in. It’s also far less emotionally taxing (at least in the short term). Yet over the course of our lives, unless we are willing to embrace the unfamiliar and to give up the security and emotional comfort it brings, we cannot grow, we cannot learn, and we cannot fulfill the potential that resides inside us.

Here are five strategies you can use to help you make the changes you need to make in order to create the future you want to live (as distinct from the default one you’ll find yourself living by taking the path of least resistance and change.)

Let’s face it  – why on earth would you willingly choose to do something that involved a lot of effort and gave rise to uncertainty and anxiety unless you thought the payoff was worth the price? You wouldn’t. It would be illogical. So before you start out, connect to your deepest values and get crystal clear about why making a change is so important to you. What are you most committed to in this one and only life of yours that will compel you out of your comfort zone and into the land of all things new and enable you to dig deep when the going gets tough? Write it down on a piece of paper since, according to study by Stanford, doing so can improve the probability of accomplishing your goal by over 70%. It’s worth the paper and, besides, you may want to return to it to remind yourself why you made the change in the first place!

Research by Professor Phillip Bobbitt from the University of Texas found that most people are pretty lousy at assessing the cost of inaction. We have a tendency to discount or ignore the cost of doing nothing while also dwelling more on what we have to give up than on what we could gain. But, as I wrote in my recent book Brave, “Delaying change can exact an increasing toll on our wealth, health, and happiness.”

Because life is the way it is, it cannot stay the way it is. Resisting or delaying change doesn’t make it easier despite how much we may try to convince ourselves otherwise. Putting off making changes only prolongs pain and makes it that much more difficult when we’re finally forced to confront the cost of sticking to the status quo.

When you have people around you who believe in your ability to successfully make a change it will make it so much easier to do. Recruit a cheer squad among your family and friends, find someone to hold you accountable, hire a trainer, join a group, or enlist a friend to check in with regularly who’ll hold you accountable. Likewise, if there are people you know who’ll discourage or distract you, avoid them or set some boundaries (at least in the short term). Often such people are threatened by your desire for change and fear being left behind. Whatever you do, never underestimate the impact of those around you to support or sabotage your efforts to change.

The bigger the change we want to make the more overwhelmed we can feel. Where to begin? How to begin? You can quickly feel overwhelmed as you dwell on the size of the gap between where you are and where you want to be. As Martin Luther King once wrote, “You don’t have to see the whole staircase, just the next step.” So focus on that… the step you need to take today and over the next few days, not next month or next year. You’ll figure that out then. I promise.

A plane can use up to 30% of its fuel just getting airborne. Likewise, as you start out toward making a change it takes a disproportionate amount of energy to build the momentum required for permanent change (remember, you’re working against Mother Nature’s law of taking the path of least resistance!).

However every time you take a new action you are subconsciously reaffirming your commitment to the future you want to create, even if that action may appear outwardly insignificant. So make it a practice to do one thing, however small, every single day. There’s no more powerful antidote to the inertia of fear than action.

Many psychologists believe that it takes between 21-30 days to firmly establish a new habit of thought or behavior. It’s easy to get caught up in an initial wave of enthusiasm, certain that your efforts will meet with instant success only to come crashing down when they don’t. Rather than focus on the grand end outcome you’re aiming for, step back to simply observe yourself as a student of change who is in the process of learning a new skill or developing a new habit that requires plenty of persistence, practice and patience. For instance, if you want to change your lifestyle, focus on being able to jog a little bit further each day you head out rather than being able to run three miles by day five. Remember, small steps.

If it were easy to change old habits or jobs or unhealthy relationships, everyone would. The truth is that it can be extremely hard and setbacks are inevitable. So don’t beat up on yourself when you fall back into old ways of thinking and acting. You-are-human! It would be much more helpful to make the necessary adjustments to avoid the same thing happening again (perhaps avoiding certain trigger situations or people) and then tap your inner John Wayne and get back in the saddle. Before you do, you may want to pull out that piece of paper (#1) to remind yourself why it’s worth your effort. Because I promise you, it is.

If you’d like support to make changes in your life, I encourage you to sign up for my Train The Brave Challenge. www.TraintheBrave.com