What Would You Write On The Courage Wall? Don’t Wish It. Do It. 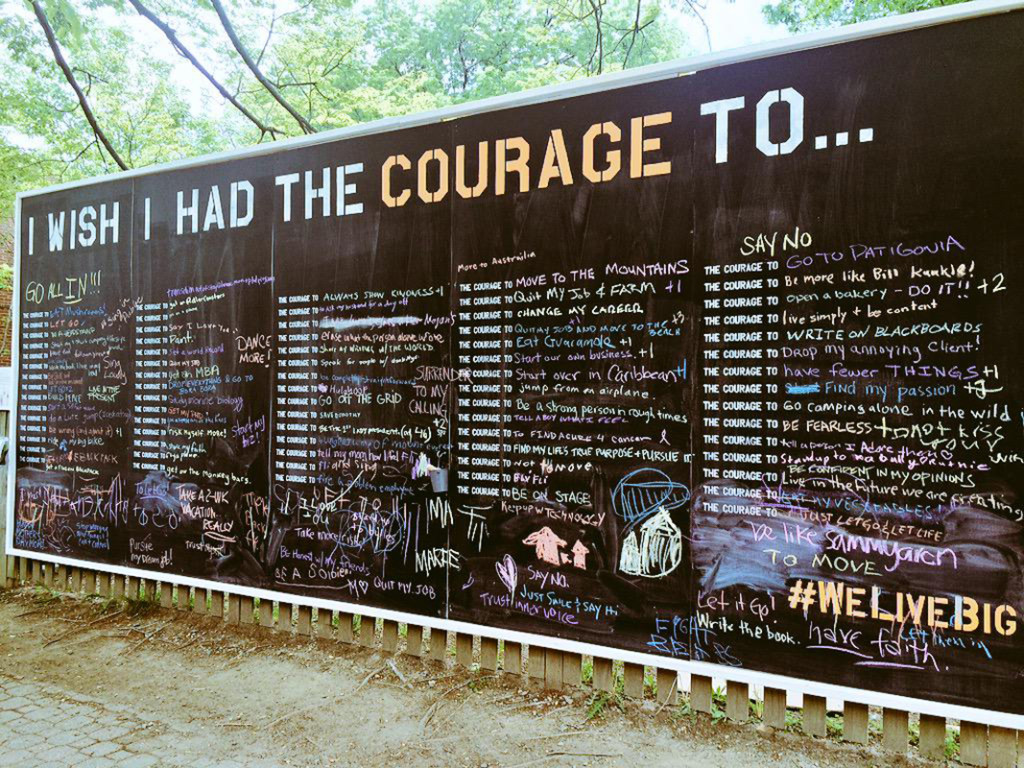 Get a new job.
Not worry about money.
Eat mayo.
Travel to a foreign country.
Ask for help.
Try out for the Princeton crew team.
Bike over a volcano.
Ask for Date #2.
Go into a shelter.
Quit my job.
Tell my secrets.
Love myself.

These are some of the things people have scribbled in chalk upon the “Courage Wall” put up by Nancy Belmont in Alexandria, Virginia, after being inspired by a TED talk.

According to an article in the Washington Post, the 20-foot blackboard wall filled up in just four hours as people flocked to record what they wished to do… if only they had the courage. The swiftness of the response reveals the struggle so many of us have with fear.

But let’s not make fear the villain. Our fears are wired in to our psychological DNA for a positive purpose – to protect u us from pain and potential threats to our safety. Once upon a time in our cave dwelling days, our instinctual fear was all that stood between our survival and death.

Nowadays though, most of us don’t have to worry about being killed by a marauding lion. Instead our fears are channeled toward threats to our social standing, personal identity and emotional vulnerability. And while no-one has ever “died of embarrassment,” we often act as though we could. In doing so we inadvertently allow our fears – conscious and unconscious, acknowledged and suppressed – to guide our decisions and, choice by choice, shape our relationships and lives.

But it doesn’t have to be that way.

The truth is that while no one is immune to fear, most of us have no idea how brave we can be. We think to ourselves “I don’t have the guts” to ask the girl out in the diner or change jobs or leave a crummy relationship, but that isn’t the case. We do have the guts to make big changes, and take big chances; it’s just that we haven’t made the decision that it’s worth the risk.

The risk of having someone step on our dreams or decline our invitation.
The risk of trying to do something and falling short.
The risk of disappointment.

Everything worthwhile requires us to take a risk in some way. Not taking those risks ultimately exacts a far greater toll than most of us are able, or willing, to see. Indeed, playing it safe may provide the illusion of safety, but it ultimately leaves us less secure.

Studies have found that people in the twilight of their lives say their biggest regret is not having taken more risks. They don’t regret the things they did do anywhere near as much as the things they never found the courage to do. It’s only from the vantage point of looking back on their lives that they realize their fears were misplaced. Or as the acronym goes, “False Evidence Appearing Real.”

In the busyness of our everyday lives, most of us just don’t take the time to ask ourselves how we will feel one, 5, 10 or 50 years from now if we don’t lay our vulnerability on the line and do that very thing that scares our socks off.

Courage far transcends heroism on the battlefield. At it’s heart, courage is a willingness to risk losing something you value now (safety, security, reputation, comfort, certainty, familiarity) for the possibility of gaining something you want even more (growth, fulfilment, contribution, achievement, connection.)

If every person who wrote on that Courage Wall decided that they never wanted to risk looking back and wondering “What if?”, just imagine the new possibilities that could open up in all of their lives. Just imagine the future they could create that they may otherwise only dream about.

In the end, the only thing standing between them and those new possibilities and opportunities is a simple yet powerful choice.

The choice to be brave.

As I wrote in my latest book Brave: 50 Everday Acts of Courage To Thrive in Work, Love & Life, nothing can rob our freedom more quickly than the fear that puts a wall around our dreams and confines our lives. And nothing can liberate us more powerfully than deciding the time has come to tear that wall down.

What are you waiting for? 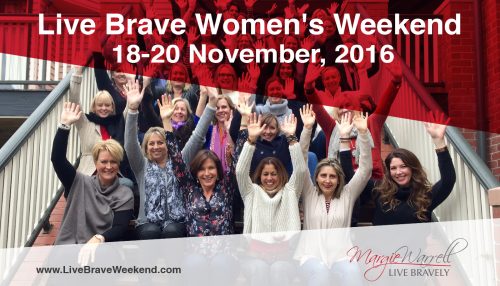