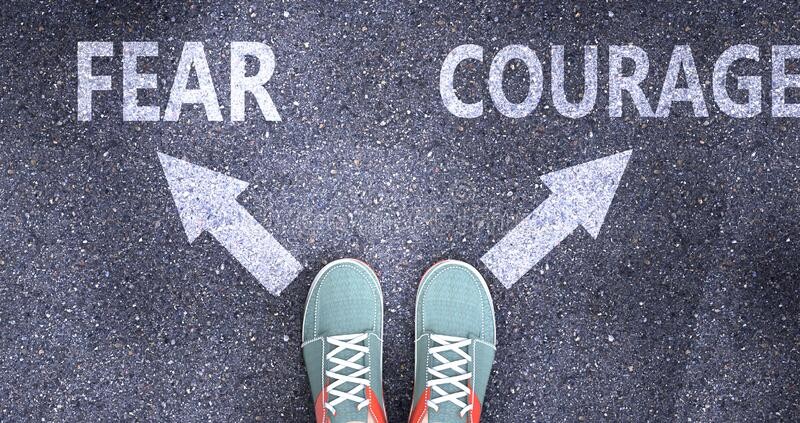 “All right, I’ll go in there for Dorothy,” announced the Cowardly Lion.

“Wicked Witch or no Wicked Witch, guards or no guards, I’ll tear ’em apart. I may not come out alive, but I’m going in.

There’s just one thing I want you fellows to do.

This scene from the Wizard of Oz (my favorite childhood movie along with the Sound of Music!) is iconic for a reason.

It speaks to the fear we all feel in the moments we want to be brave and ‘go in’ – to step up, speak up, and pursue what lights us up – but we’re scared of what might happen if we do.

We might fall prey to our detractors or risk being exposed as insufficient for the task.

We might suffer the sting of rejection or just as scary for some, we might actually succeed! And then what? More pressure, more to lose… further to fall.

The last few years have left millions feeling frayed and afraid. Yet, as I wrote in Stop Playing Safe:

It’s when fear runs high that the need for courage runs higher.

So if you have an inkling right now that you need to take a chance or make a change, here are four ways to summon your courage and rise above the voice of that metaphorical “Cowardly lion” that lives within each of us.

1.     Ground Yourself in Self-Certainty

“I always wanted to be somebody,” said Lily Tomlin, “I should have been more specific.”

In a world of constant change and uncertainty, being certain about the unchanging values you will operate from makes all the difference. As researchers at Stanford University found, people who operate with attitude-certainty remain more confident under pressure and less susceptible to self-doubt. Committing to the values you want to embody… integrity, contribution, empathy, service, community… acts like a compass when life’s pressure mount, compelling you to exit your comfort zone when your fear urges otherwise.

Conversely, unless you put a stake in the ground and commit to the kind of person and leader you want to be, the path of least resistance will likely win out, keeping you from stepping up to the plate in the moments that matter most.

Who do you want to ‘be’ – in your work, leadership and life?

Our brains are exquisitely wired to attend to immediate threats to our sense of safety. As N Nobel Laureate Daniel Kahnahm discovered, our brains are twice as sensitive to potential (near-term) losses as they are to potential (often longer-term) gains. The last two years have only magnified our sensitivity to risks, undermining our ability to discern the smart risks worth taking from the foolish ones that aren’t.

So if you’re on the fence and unsure whether to ‘take the chance’ justifications for playing it safe will always be easier to find.

Pressing ‘Google Earth’ on your life and stepping into the shoes of your ‘future self’ – one, five, or 50 years from now – enlarges your perspective, reframing your perceptions of risk through a broader lens.

The costs of playing it safe are never immediate, obvious, or dramatic. Yet timidity can exact a steep hidden tax. And often more than we’d like to acknowledge.

Of course, the path of courage doesn’t always land the date, win the sale, or earn the Gold. Yet over the long arch of life, people regret far more the risks they were too timid to take than those they did. To quote Harvard psychologist Daniel Gilbert:

Because even when things don’t land just as you want, you still learn and you still grow and you build ‘muscles for life’.  As I shared in my TEDx talk :

The greatest reward you get from acting with courage is not accomplishing a goal, but who you become.

What does your ‘future-self’ want you to do right now? As someone who tends to move fast, I can highly recommend giving yourself a little ‘time out’ to sit still long enough to hear the answer.

Our loss aversion bias drives us to discount what we put at risk when we play it safe. Yet as I wrote in Stop Playing Safe, playing it safe rarely makes headlines. The consequences are rarely immediate, dramatic, or obvious. But timidity exacts a steep hidden tax. Often higher than we like to think.

Every day we play it safe and continue with the status quo is a day we aren’t learning, growing and, quite possibly, are sliding slowly backward in a world marching steadily forward. What does not playing safe look like? Only you can know that. For instance, it may be deciding to:

Might some people try to talk you out of it? Of course.  Many are well practiced at turning forecasts into ‘fearcasts.’ It may pay to hear them out. Perhaps there are legitimate risks you haven’t considered. But counter your ‘risk aversion bias’ by asking:

What do you put at risk by not taking the chance?

People often ask ‘What would you do if you weren’t afraid of failing?’ The better question:

‘What goal is so worthy of pursuing that even if you failed, you would never regret having tried?’

You are uniquely positioned to make an impact in a way that no one else can. Yet, like Dorothy’s Lion, we each have the voice of Coward and Courage within us.

So just imagine the future you could create if you decided to choose courage over comfort, purpose over pride, and service to others over safety? And if you’re in a leadership role, imagine what your team/organization could do if you created a ‘culture of courage’?

Peripheral risk-taking protects the core. In business, leadership, and life.

To paraphrase Anais Nin, life expands in proportion to your courage.

Go on, go in. Not for Dorothy. But for the person you aspire to become.